Approximately 20% of the adult population in the United States suffers from sleep apnea according, to the American Academy of Sleep Medicine (AASM).

Among men, the rate of sleep apnea is higher and closer to 27%. Men also are more likely to suffer from moderate to severe sleep apnea than women.

Traumatic brain injuries (TBI) are also common in men, accounting for 18,500 hospitalizations yearly. The CDC estimates 1.7 million people visit the emergency room resulting from a TBI yearly. TBI is the leading cause of post-traumatic stress disorder (PTSD) among veterans.

Is there a connection between TBI and sleep apnea?

Continue reading as we explore this issue, focusing on whether traumatic injuries and sleep apnea are linked.

What Is Sleep Apnea?

Sleep apnea occurs when breathing stops and starts.  This happens over and over while someone is sleeping. This causes non-restorative sleep.  The body is not given the time to reset and instead spends the sleep time struggling to breathe. Your time spent sleeping is very important as it clears the body of poisonous build-ups that can lead to, among other things, memory-impaired disabilities. 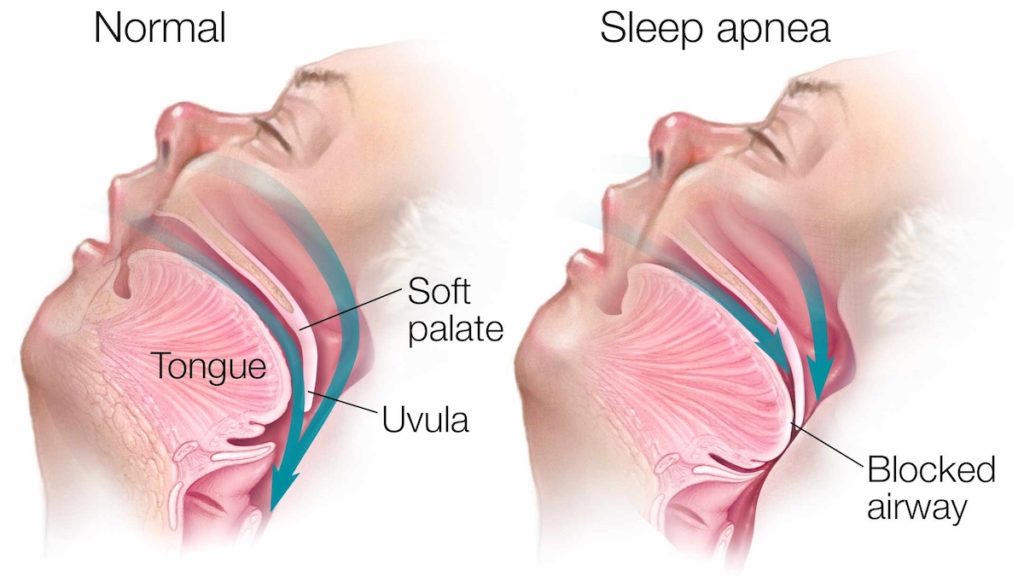 Loud snoring may indicate a serious problem. There are other symptoms to watch for because not everyone who has sleep apnea snores. A person who suffers from sleep apnea may also have extreme fatigue and irritability even after what is perceived to be a full night's sleep.

There are two types of sleep apnea: central and obstructive. Central sleep apnea is caused by problems associated with how your brain controls your breathing. Obstructive sleep apnea occurs when something causes the airway to be blocked repetitively. As the muscles of your chest work harder to unblock the airway, a patient may gasp for air or jerk as a result.  Doing this several times throughout the night leads to little sleep.

A TBI happens when an outside blow alters brain function. A TBI can affect a patient's physical health, mental and emotional health, and cognitive health.

Our brain regulates our sleep.  It tells our body when it is time to sleep and puts our body to sleep so that it can rest. When a brain is injured many of these abilities can be affected, resulting in sleep disorders such as sleep apnea.

The degree of injury, according to the study, does not seem to determine the severity of the sleep disorder. A mild concussion can have the same effects as a moderate concussion as far as a sleep disorder, such as sleep apnea, is concerned.

Sleep Apnea Can Worsen the Symptoms of a Traumatic Brain Injury

Sleeping disorders such as sleep apnea can worsen the symptoms of a traumatic brain injury. The symptoms of one compounding with the other, causing a slow recovery.

With the same structural networks being involved, it is likely that a traumatic brain injury would interrupt brain signals operating on the same paths that trigger central sleep apnea.

The brain controls our breathing during sleep.  After a TBI, the ability of the brain to do this may be influenced. This may cause breathing to stop and blood oxygen levels to drop in the form of sleep apnea.

A person with a traumatic brain injury needs the body to be in a healthy sleep cycle in order for the brain to heal. If someone with a TBI is experiencing interrupted sleep due to sleep apnea, the brain will continue to struggle and not heal.

Sleep is vital to an individual's health. When sleep is interrupted, serious health concerns arise.  The most serious of which is related to the cardiovascular system.

People who suffer from sleep apnea will have excessive daytime fatigue as well as mood swings and declining cognitive abilities. A person with sleep apnea is having their sleep constantly interrupted causing their body not to rest and alleviate some of the chronic symptoms that have arisen.

Daytime vs Nighttime Symptoms from Medthority

These symptoms may be signs of an alarming bigger picture that includes type 2 diabetes, stroke, and heart attack.  High blood pressure can be made worse by the low oxygen levels induced by sleep apnea.  Atrial fibrillation can also be caused by obstructive sleep apnea.

Metabolic syndrome, which may include high blood sugar, low good cholesterol, and high levels of triglycerides, is also a byproduct of sleep apnea. Adult asthma, acid reflux, memory loss, and depression are all linked to sleep apnea as well.

One of the most startling facts is associated with a recent study: adults with sleep apnea had a "twofold increased risk of sudden death from any cause". This is due to the overstimulation of the nervous system as your body attempts to get you to breathe again.

It is estimated that sleep disorders affect anywhere from 30-70% of those with a traumatic brain injury. This may include anything from insomnia to narcolepsy.  The research from this study did show a link between TBI and sleep apnea, among the many possible sleep disorders.

It was also noted that the type of sleep disorder could be directly related to the type of TBI, mild, closed, etc., and where the injury took place.  It is possible that mild head injuries, and concussions, may cause more noticeable sleep problems.

Changes in neurological functions attributed to a traumatic brain injury contribute to sleep problems and specifically sleep apnea. A recent study of veterans with TBI showed that the most common sleep disorder among the group was sleep apnea.

Further, the study showed that sleep apnea caused serious differences in a patient's ability to pay attention over a period of time and how their memory functioned.

Sallie® is an app created by Power of Patients to help caregivers and patients in the journey to recovery when dealing with a traumatic brain injury.

Traumatic brain injuries can be very overwhelming and lead to chronic stress.  Whether you are dealing with the symptoms of a concussion or recovering from an event that left you unconscious, the ability to track your symptoms will allow for a better overall picture of your health.

A sleep disorder can severely impact your life.  It can also add to your disability, making it hard to recover.  The path to recovery is often difficult and should not be hindered by sleep disorders such as sleep apnea that disrupt your sleep patterns and make it difficult for your body to get what it needs.

Sallie® has a very intuitive dashboard that allows for ease of use when recording symptoms and the progression of those symptoms. If symptoms are left untreated, the detriment to a person's recovery and overall health can be significant.

Diligently working to have good sleep hygiene while using an app like Sallie®, will help you to successfully navigate the road to recovery.

Also, working carefully with your doctor and monitoring your symptoms with the use of Sallie®, will allow for a better and possibly quicker recovery.  Begin this journey as soon as possible by signing up for Sallie® here.

Can the Innovative SallieⓇ Cater Toward TBI AND Mental Health?

The answer is YES. Irritability and Anger: How TBI Affects Aggression and What to Do

A traumatic brain injury affects more than just you and your brain. It affects everyone who comes... Traumatic brain injuries lead to a vast array of symptoms depending on the severity and location of...